Tanzanite Prices & Value - For 2019 and A Historical Perspective 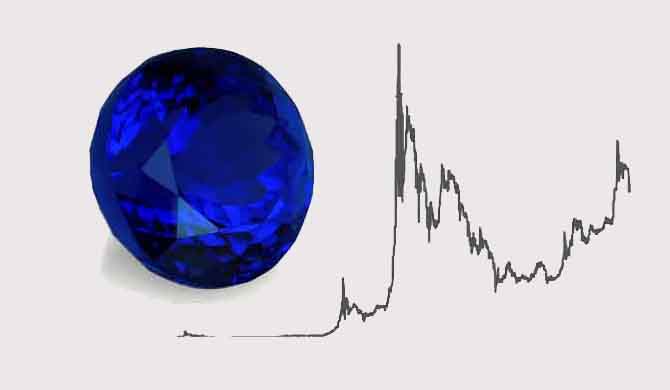 Tanzanite prices are dictated by the laws of supply and demand in a way Diamond prices aren't. Diamond prices are controlled by the big players like De Beers who control the supply to market and hence the price. Unlike Diamonds and gems like Tsavorite, Tanzanite prices do not currently increase rapidly on a per carat basis at different carat brackets. Tanzanite value and hence price is very much linked to rarity - the finer the color/clarity/cutting grade the higher the price. The chart below is a snapshot of prices currently observed in the market in 2019. Within each bracket there is a price range and this accounts for different outlets and different markups within the supply chain. If you buy at Tiffany's for example, the price for the same Tanzanite will be different than buying from the source. CHART SHOWING TANZANITE PER CARAT PRICES IN 2019 The chart assumes good cutting and proportions and VVS clarity. CARAT WEIGHT Investment Grade Finest 1% Mined AAA Grade AA Grade A Grade B Grade 0.00 - 1.99 carats $600 - $700 $425-$480 $300 $200 $100 2.00 - 2.99 carats $750 - $1350 $500 - $550 $325 $250 $150 3.00 to 9.99 carats $780 - $1380 $550 - $575 $350 $275 $170 10 carats plus $800 - $1500 $580 - $590 $400 $300 $190 Adjustments Fine Cutting - Add 5% to 15%    Poor/Native Cutting - Deduct 15% to 30% Clarity Adjustments    VS Clarity - Deduct 5% - 8%     SI Clarity - Deduct 15% to 20% Tanzanite Prices - A Historical Perspective The Early Years When Tanzanite was first discovered in the late 1960’s it was controlled by Tiffany & Company who gave it its name and were the first true marketers of the gemstone. Prices were high as Tiffany commanded a monopoly and supply out of the fledgling mines was low and sporadic. This continued through to the late 1980’s. Although Tiffany no longer controlled the market, the sporadic and unreliable supply from the mines kept prices high as demand increased with consumers in the US and other markets began to learn about and appreciate this wonderful gem. Tanzania, at that time, was a communist/socialist country under president Julius Nyerere and as such all mineral wealth officially belonged to the state. This led to lack of investment in the mining of the stone and very shaky production. The 1990's In the late 1990’s and early 2000’s as Tanzania adopted a capitalist economy, production stabilized and rose leading to a drop in prices further compounded in 2001 when the stone was implicated as a funding source to Al Qaeda in the aftermath of the 9/11 tragedy. Large retailers like Zales announced they were no longer going to sell Tanzanite and others followed suit leading to a catastrophic decline in prices. Fortunately this state of affairs did not last long as a full State Department / CIA report released in early 2002 cleared the industry of any links to Al Qaeda and Tanzanite rose again. The 2000's From 2002 to 2007 prices surged. From lows of $200 per carat for medium to medium/fine goods they rose to the heady heights of $600+ per carat before dropping back by 20-30% in the ravages of the recession in 2008/2009. The recession did not affect the prices of the very finest grades but medium/fine material and lower grades were severely affected. The finest grades were bolstered by ongoing demand from the relatively unaffected highest income brackets in the developed markets coupled with extremely low supply due to their rarity. Lower grades by contrast, lost up to 50% of their price value through 2009. Through 2010 into 2013 prices stabilized and returned to their pre-recession levels and prices for the very finest stones began to edge upwards again. This trend sporadically continued into 2018 when an aggressive government under the new president, John Magafuli virtually brought Tanzanite production to a standstill. Unlike his predecessor, Steve Kikwete, Magaful's approach is more like Nyerere's and an increasingly authoritarian government caused havoc in the sector with most mines shutting down production and supply coming to a standstill. The Future Looking forward, there are a number of factors which may affect prices. China’s recent foray into the market and growing demand for Tanzanite in that country is a wild card that could affect the price trajectory in coming years. A lot will depend on the recovery of the largest market, the US and the buying power of the middle class consumer there. This will be the propeller for Tanzanite sales in the medium to medium/fine grades. The finest grades will likely see continued price inflation through prevailing low supply due to their rarity and high demand from high income brackets in the US and China markets in line with that of other gems such as ruby and emerald which have seen record prices reached for fine select stones at auction since 2012. Our view on this is backed up by a recent article in National Jeweler which talks about how the impact of the rise of the Chinese and other emerging markets is affecting colored stone prices, Tanzanite being one of the main stones affected. Our view remains that the more ubiquitous qualities of Tanzanite, the medium and medium/fine grade colors will always be more susceptible to the vagaries of the market but the very finest stones will always hold their value and experience steady price inflation due to their rarity and burgeoning demand. The big watershed for Tanzanite prices is expected to be realized once the stone is mined out. This is what makes the stone an interesting prospect as an investment. This article on Tanzanite as an Investment Gemstone explores this possibility.